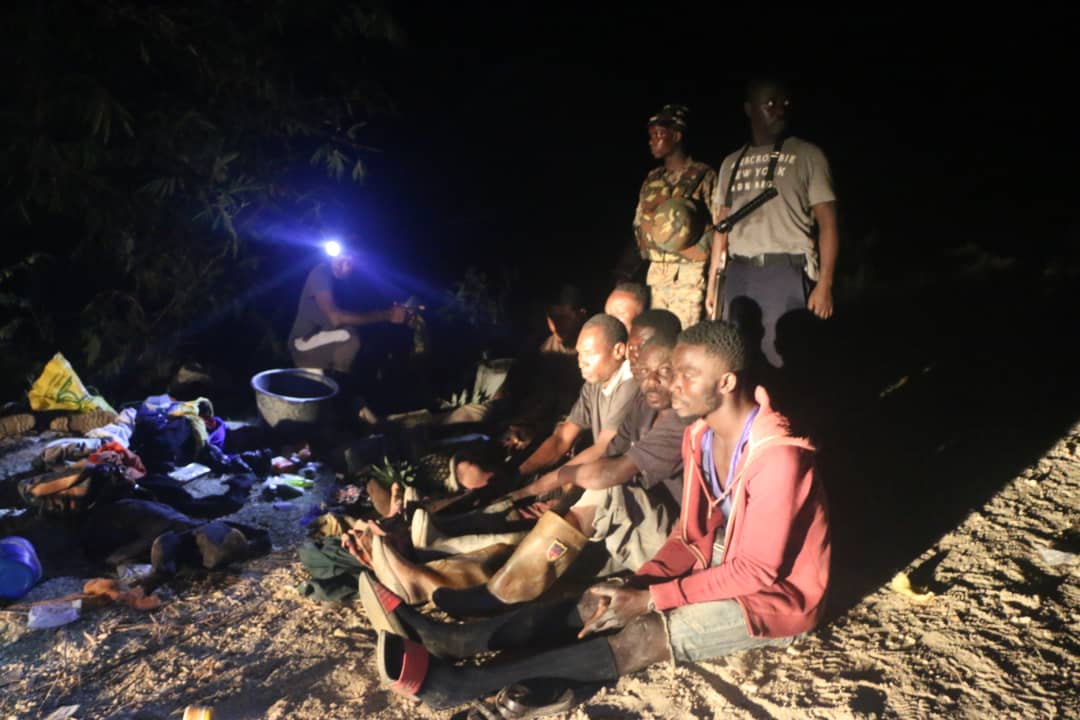 On Monday 20th January 2020, the suspects, all Ghanaian nationals, between the ages of 21 and 59, upon sighting the patrol team, took to their heels, however, luck eluded them as the taskforce chased after and apprehended them.

The team also seized items during the arrest, such as a 4 locally manufactured single barrel gun, 12 BB cartridges, 3 handheld Motorola radio sets, an excavator control board and a Toshiba laptop computer.

The seized items were sent to FOB Ashanti storehouse as exhibits, and the suspects handed over to the Obuasi Divisional Police Command, to continue with investigation and prosecution.

In another development, the Western FOB (FOB WEST), under the command of the Officer Commanding (OC), arrested in-the-act, three Chinese illegal miners at “Gyae Nkota Buo” in the Amenfi Central District in the Western Region on Monday 20th January 2020.

The suspects, between the ages of 25 and 50 years and the exhibits linking them to their illegal mining operations, have since been detained at the Manso Amenfi District Police command, for investigation and prosecution.

The OC, FOB WEST and leader of the operation, stated that the Chinese illegal miners in the region have adopted various strategies, to make their operations inaccessible to the joint taskforce.

He however emphasized that the Joint Task Force will diversify and intensify its operations, given the requisite intelligence gathering and the necessary logistical support to stop, arrest and prosecute same.

The OC called on Ghanaians to support the work of the Operation Vanguard Task Force in the Western Region in particular, and across the country, generally, to help save the environment and water bodies.

The Crime Officer for FOB West, gave the assurance that frantic efforts were underway to ensure that all arrested perpetrators of illegal mining activities in their Area of Operation, are brought to book, to serve as deterrent to other illegal miners.

He therefore implored stakeholders and other state agencies involved in the prosecution of these illegal miners, to do their best to boost the efforts of the Task Force, in order to attain unto the needed result.

Operation Vanguard is poised to fulfill the vision of the President – to combat the activities of illegal miners – which over the years, have depleted Ghana’s forest and also polluted water bodies.

Regardless of the dangers posed by illegal mining to the Nation, miners are still adamant to adhere to the President’s call to halt their loathsome activities.