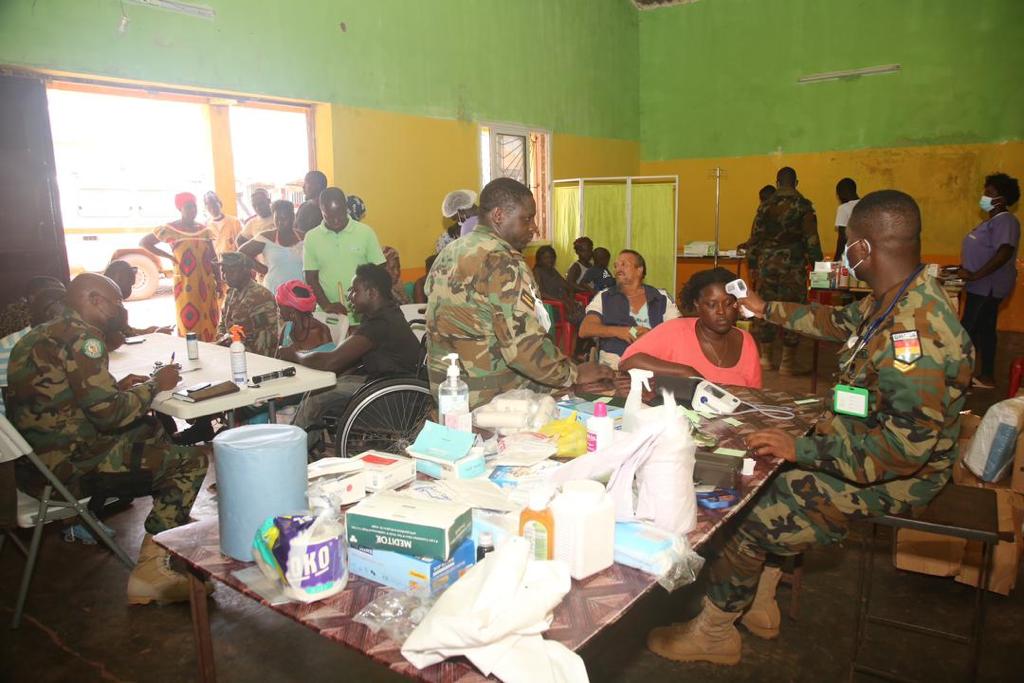 The Ghana Company 1 (GHANCOY 1), serving with the ECOWAS Stabilisation Support Mission in Guinea-Bissau (ESSMGB) conducted a Joint Long-Range Patrol (LRP) with the Guinea-Bissau Army, Police, and National Guard, in the Northern Sector of ESSMGB’s area of operation (AOR).

As part of the LRP on Thursday 29 September 2022, where the principal areas patrolled were Mansoa, Bissora, Bula and Ingore, a Medical Outreach Programme (MOP) was also conducted in Bula, which is 40 kilometres (km) Northwest of the national Capital Bissau, in the Cacheu Region.

The MOP, which served as part of the Unit’s Civil-Military Cooperation (CIMIC) plan, was held concurrently with the LRP, as the MOP provided comprehensive consultation on medical, surgical, paediatric and gynaecological issues, and targeted the deprived locals of the Bula prefecture.

The objective of the CIMIC/MOP was to win the hearts and minds of the local population of Guinea-Bissau and create a conducive environment for further operations.

Speaking to the Press, Lt Col D Korsah said the initiative feeds into the broader objectives of the ESSMGB CIMIC plan.

The CT Comd expressed his appreciation to the Presidency and Health Ministry of Guinea-Bissau for facilitating the successful conduct of the MOP, and lauded the benevolence of some pharmaceutical companies in Ghana, who donated medical items towards GHANCOY 1’s CIMIC activities in Guinea-Bissau.

He stated that the tremendous support by these entities namely; ERNEST CHEMIST, KINAPHARMA, DANNEX AYRTON STARWIN, PHARMANOVA, TOBBINCO and UNICHEM, ensured the successful conduct of the MOP.

The Health Director of Bula Sector, Dr Adama Delgado who received the items, thanked GHANCOY 1 for the kind gesture, noting that, owing to the donation and the MOP by GHANCOY, the people of Bula will benefit medically in the coming days.