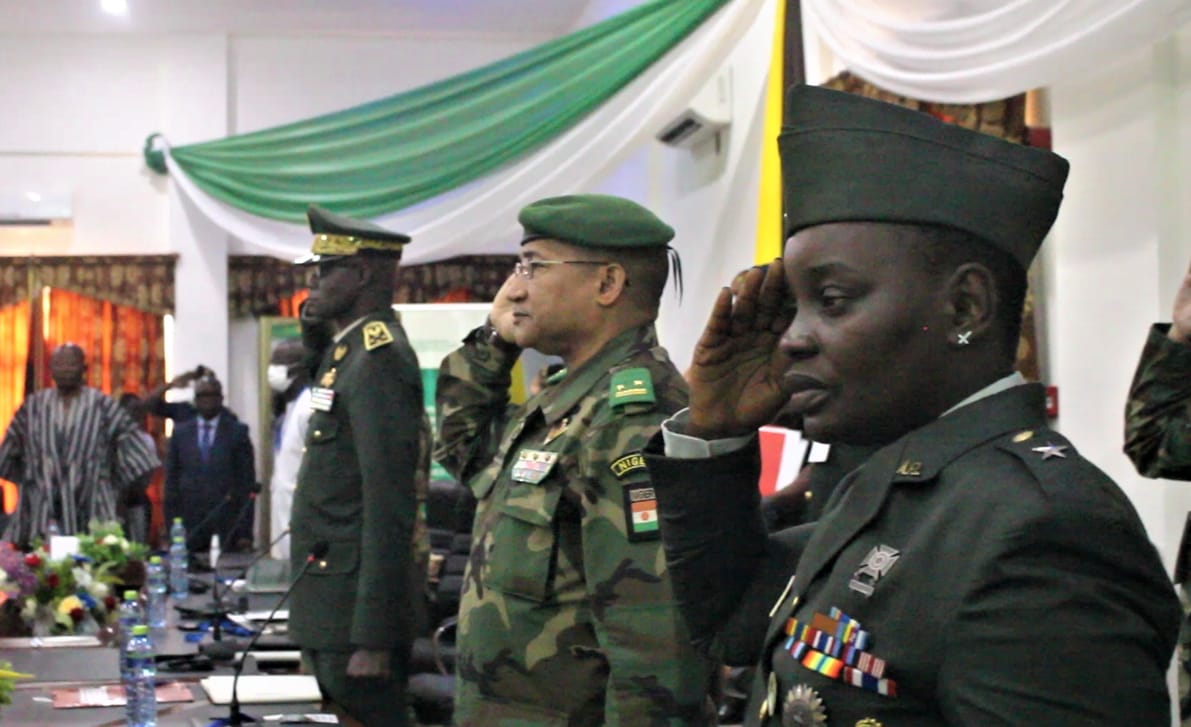 The 2-day Extraordinary Meeting of West Africa Chiefs of Defence Staff, held to dialogue and find solutions to the many security challenges of the sub-region, has successfully come to an end, with a call for member-states of the Economic Community of West Africa States (ECOWAS) and its Commission, to find means of funding recommendations of the meeting.

The meeting on 5 and 6 May, 2022, which saw the participation of fifteen ECOWAS Chiefs of Defence Staff (CDS) or their representatives, included the participation of military administrations of Burkina Faso, Guinea and Mali, even though they are under sanctions of the regional body.

Delivering his closing remarks, the Chairperson of the meeting – the CDS of the Ghana Armed Forces (GAF), Vice Admiral (V/Adm) Seth Amoama, called for a formidable joint force that is well-trained, well-motivated with the requisite capacity and logistics, to deal with insecurity challenges, urging ECOWAS governments and the Commission, to continue to explore other sources to assist in providing adequate funding and robust logistic support for the effective implementation of proposed strategies.

Admiral Amoama extolled the passionate, intellectual and cogent contributions made at resolving critical security challenges in the region, but said there are enormous problems that may engulf the entire region if collective efforts towards solutions are not fast-tracked.

V/Adm Amoama concluded with the notice that his tenure of office as Chairperson of the Committee of ECOWAS CDS would soon be ending, since the position is co-terminus with the tenure of the Chairmanship of the Heads of State and Government, and thus called for the support of the Committee for his would-be successor.

A validated Operational Plan from the ECOWAS Eight Point Action Plan determined at the 8th meeting of Defence and Security Ministers in Benin, in April 2022, after the Accra Initiative, authorized the meeting which was held to dialogue on defence and security matters such as; Violent Extremist Organizations, Terrorist Armed Groups and Transnational Organized Criminal Networks.

The Accra Initiative is a cooperative and collaborative security mechanism, launched in September 2017, and aims at preventing spillover of terrorism from the Sahel and to address transnational organized crime and violent extremism, in ECOWAS countries’ border areas.

The extraordinary gathering was also charged to achieve a common understanding of the threats that confront the sub-region and contribute to implementing the multi-faceted approach to resolving them, and for concrete steps to be taken to galvanize support for the countries currently fighting maritime insecurity and the scourge of terrorism and violent extremism.

In an interview, the ECOWAS Commissioner for Political Affairs, Peace and Security – Brigadier General (Brig Gen) Francis Benhazin (Rtd), said the ECOWAS heads adopted an action plan to combat terrorism for 5 years with 8 components, beginning by training and equipping the security services, sharing of information and intelligence, securing the borders of countries, dialogue between communities, and supported by adequate funding.

The Commissioner said terrorism in the sub-region begun from the Sahel Region, after the Libya civil war, and has spread from Mali, to Burkina Faso, Niger and now targeting the coastal states, such as Nigeria and Cote d’Ivoire.
He made a request to the general citizenry of West Africans to provide information to the military, the police and other security agencies, should anyone notice strange movements and associations in their communities, to help the forces effectively uproot insecurity.

On the issue of the lack of information and intelligence sharing between member countries’ state agencies, General Benhazin said the Commission had brought together all the intelligence agencies responsible for the fifteen member states of ECOWAS and has included Chad and Mauritania.

Additionally, the Commission has put together all National Security Advisers (which is the last system before the Heads of States and Government), the CDS, the Inspectors General of Police, and the Directors of Gendarmeries for the countries who operated such, and tasked them to share information, via a platform named West Africa Police Information System Sharing (WAPISS) which is supported by the European Union and implemented by the Interpol.

On the issue of recent coup d’états in West Africa, he opined that terrorism is organized crime, and where there is instability, organized crime would flourish, for which reason, ECOWAS is ensuring the institutionalization of constitutional governments.

On the participation of the three suspended members (Burkina Faso, Guinea and Mali) in the meeting, the Commissioner revealed that authorization was given by the Chairman of the Authority of ECOWAS member states, that these countries participate, because there are no borders for organized crime, thus one country cannot be properly secured when its neighbours are not.