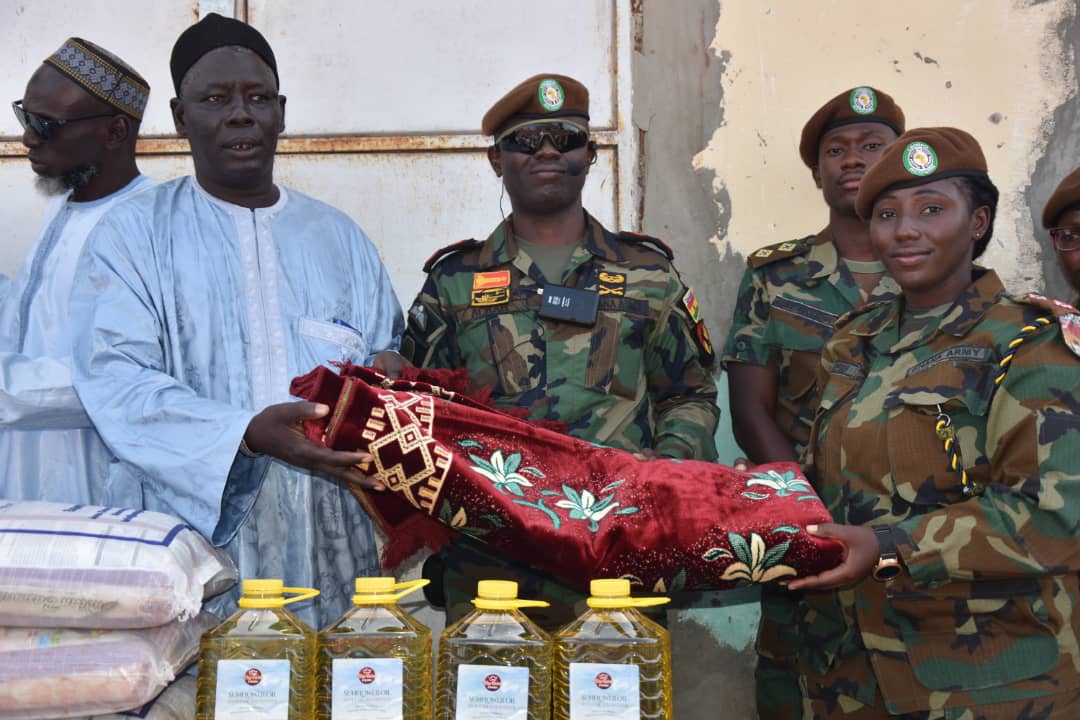 As part of the 2022 Eid celebration and in line with the Unit’s Civil Military Cooperation (CIMIC) activities, the Sixth Ghanaian Contingent (ECOMIG GHANCOY 6) deployed with the ECOWAS Mission in The Gambia, have donated assorted items to the people of Barra via the Barra Central Mosque, in The Gambia.

The presentation which took place on Monday, 2 May 2022, had as part of the gifts, items such as food, Islamic prayer beads, kettles and mats.

Presenting the items on behalf of the GHANCOY 6, the Officer Commanding (OC) – Lieutenant Colonel (Lt Col) William Kobby Anyimah Ackah, assured the people of Barra of the Ghanaian Contingent’s continuous commitment to the quest for enhanced democracy, peace and security in Barra in particular, and The Gambia in general.

He further stated that Ghanaian contingents and the people of Barra have enjoyed a history of co-existing peacefully, as good neighbours; and thus, the donation should be seen as the contingent’s CIMIC duties, which is made on the special day of Ramadan to deepen the relationship of the two neighbours.

The OC urged the leaders and people of the Barra Community, to be assured of GHANCOY 6’s continued assistance to them, as part of its mandate by ECOWAS, in order to help improve the welfare of the people, which will inure to the development of The Gambia at large, as they heed to appeals to the community to continue to live and foster peace.

The Akalo (Chief) of Barra, who received the items on behalf of the community, thanked the GHANCOY 6 for their continuous support since their deployment in the area, and recounted how peaceful and serene the area has been with thriving socio-economic activities, after which the Barra Chief Imam, led the worshippers in praying for the Unit as well as the country