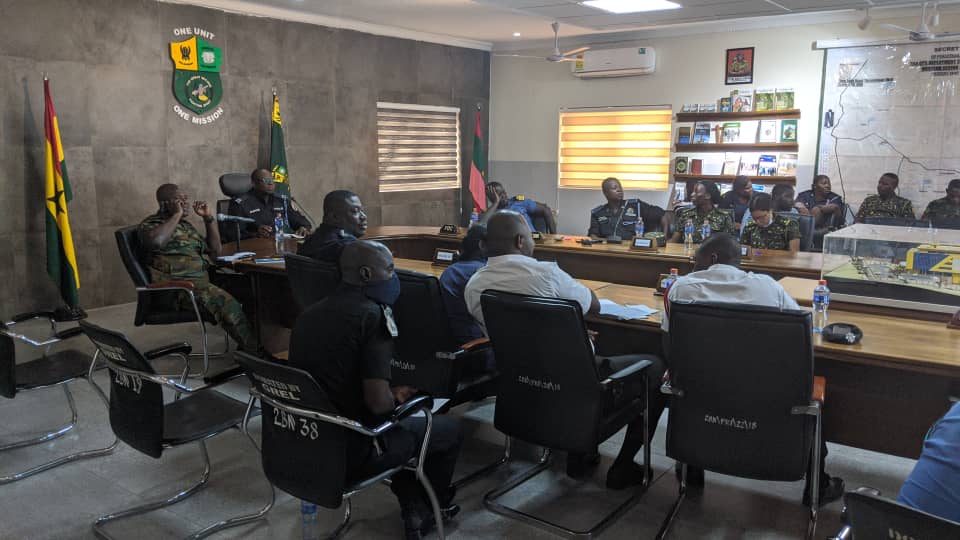 The event which took place at the AKWA COMPLEX, at the Myohaung Barracks of the Two Battalion of Infantry (2Bn), had the Ghana Police Service’s Western Regional 2IC for Operations – Chief Superintendent Achaab, chairing proceedings as ‘Chief Actor’ of Internal Security, with the Commander Rear and Second-In-Command (2IC) of 2Bn, as the Facilitator.

The exhaustive session of the training exercise, saw participants deliberating on further enhancing operational interoperability amongst security agencies, constituting the Election Security Task Force, as scenarios were activated as if real, for the JOC to react.

Members of the JOC were also taken through resources that ought to be available at the center, after which they were divided into sectors, giving narratives/scenarios to dialogue and provide solutions for implementation.

Consequently, the JOC made some recommendations such as; the Ghana National Fire Service (GNFS) being part of Crowd Control in dispersing crowds with water, in areas where the Police Water Canons are not available, the National Ambulance Service being available in such cases, since there could be injuries.

The members also recommended the use of ‘Loud Hailers’ (megaphones) and cameras for evidence gathering, by every Patrol Vehicle, which cost should be borne by the District/Municipal and Metropolitan Assemblies, for crowd control, in preparation for the general elections.

They additionally urged the JOC to educate voters present on election day at the polling station, via loud hailers, and be prepared to talk to the media on crowd control.

Finally, the Electoral Commission (EC), was urged to be part of the JOC and for the electoral body to consider the use of the Ghana Police Service Internal Security Architecture, in dealing with the issue of chaos caused by delays in distributing electoral materials to polling stations, on election day. These were all encompassed in the Commander’s Update Brief.

The Police Service has cells systems from the National, Regional, Divisional, Station, through to Posts, which could hold electoral materials and thus cut costs, for the EC to create district systems across the country for that purpose.