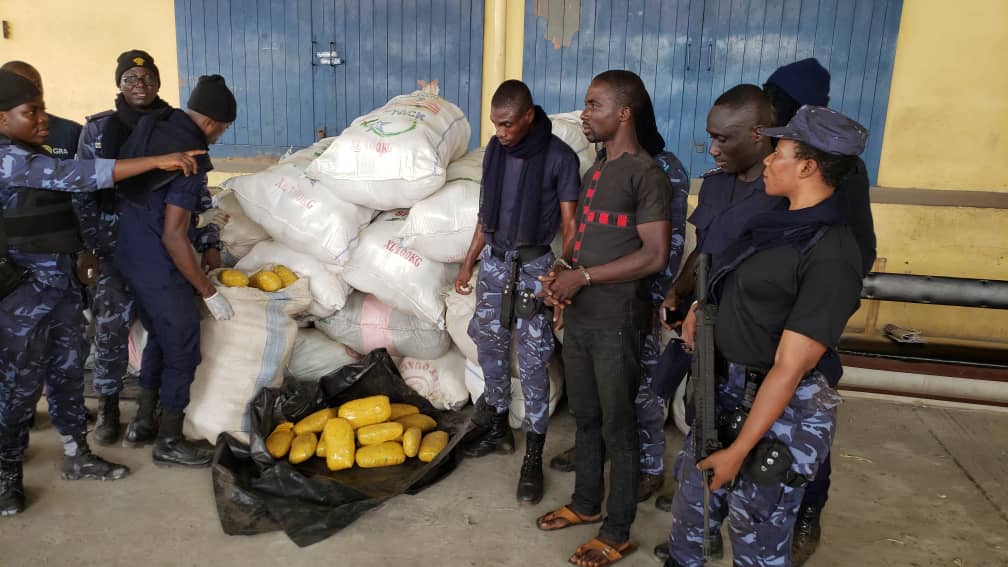 A nine-member team of Custom Officers of the Ghana Revenue Authority (GRA), from Aflao Collection on patrols, have intercepted a Mercedes Benz sprinter van, at LORKPA a village between Ziope and Akatsi, in the Akatsi South District of Volta Region conveying substances suspected to be Indian hemp.

On the 9th of February, 2020, at about 02:07 hours, officers from the Aflao Collection point, on patrols and led by Assistant Revenue Officer (ARO) ARMSTRONG K. ANANE, intercepted the Mercedes Benz sprinter van, with registration number GS 2744-17 at LORKPA at a village between Ziope and Akatsi, in the Akatsi South District of Volta Region.

One suspect by name SAMUEL GAMELI (43 years) a native of Akatsi, was arrested in the course of the operation, after which the team escorted the vehicle and the suspect to Aflao Customs Station for examination.

At about 10:00hrs, on 9th February, a joint team of Customs, NARCOB, Bureau of National Investigation, National Security, Defence Intelligence, Police, Food and Drugs Authority conducted examination on the vehicle and found content as follows:

In a letter signed for the Customs Sector Commander, by Chief Revenue Officer (CRO) Majeed Amandi, details of the package seized, was handed over to NARCOB the lead agency in narcotics control.