The visit which took place on Tuesday, 5 February 2019, at the Mango Camp in Aweil, forms part of the routine engagements of the Ghana Armed Forces (GAF) high command to visit and interact with troops in missions outside its borders to find out how they fare.

The visit was also intended for the COAS to familiarize with the GHANCOY position, to ascertain the conditions under which his troops live and operate since UNMISS GHANCOY is a relatively new mission.

Upon arrival in the camp, Maj Gen Ayamdo paid a courtesy call on the Head of Field Office (HoFO) of UNMISS Aweil, Mr Hailu Ataklti for a brief interaction after which he was ushered to the Company Operations Room for a thorough brief of the tasks, duties, responsibilities and deployment of troops in the mission.

The Army Chief later addressed a durbar of troops of the Company, where he relayed information to them from high command as well as clarified issues and answered questions posed by troops in relation to GAF and its activities.

The COAS and his entourage then departed for Bentiu, where he is expected to witness the Medals Presentation parade of the sixth Ghanaian Battalion serving with UNMISS on Wednesday 6 February 2019.

UNMISS GHANCOY1 is the youngest Ghanaian peacekeeping mission, which was deployed to Aweil, in the Northern Bahr El Ghazal region of South Sudan in June 2018, to help the UN achieve its peacekeeping mandate.

The Company comprises of 149 all ranks and is commanded by Lieutenant-Colonel (Col Felix) Kweku Mautsueni. 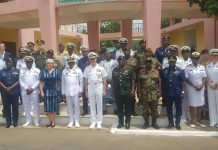 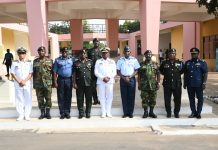 UNIFIL GHANBATT 85 DONATES TO THE 37 MILITARY HOSPITAL AND OTHER...