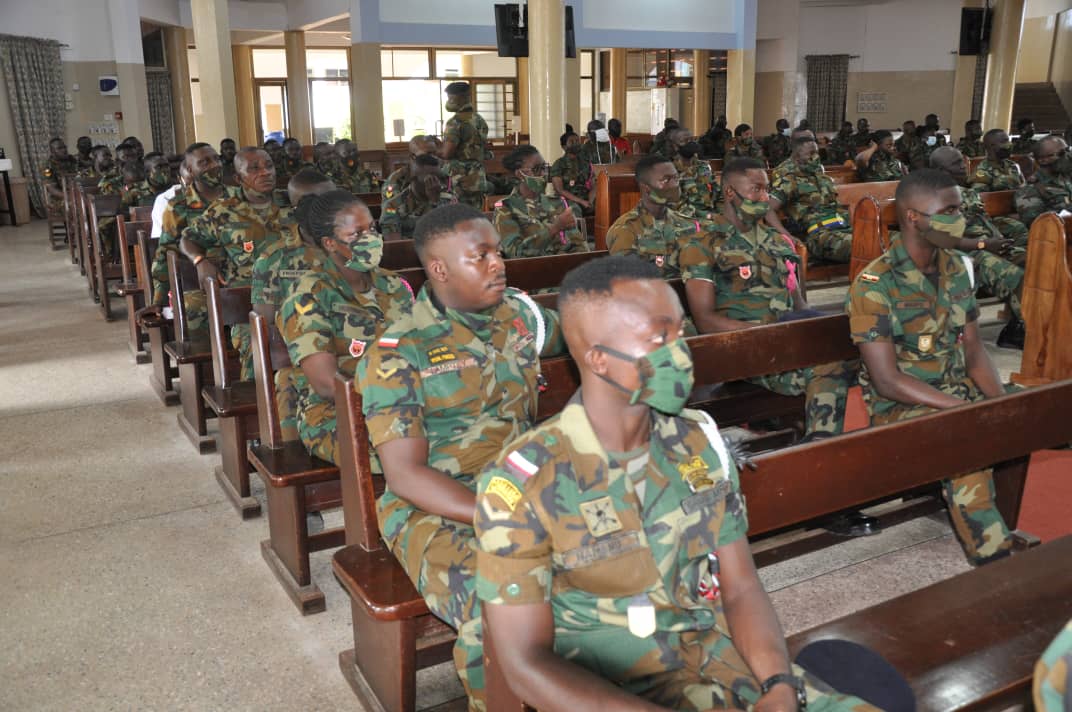 The Chief of the Army Staff (COAS) of the Ghana Armed Forces (GAF) – Major General (Maj Gen) Thomas Oppong-Peprah, has thrown down the gauntlet to any of his masked accusers, to prove that he or any of his senior officers are shareholders in any mining company at Tontokrom, in the Amansie District, in the Ashanti Region.

Maj Gen Oppong-Peprah threw the challenge at an emergency durbar with personnel of the Headquarters, Central Command (C/COMD) and Four Battalion of Infantry (4Bn), at the OB AKWA Auditorium, Kumasi, on Thursday, 21st January, 2021.

Following a publication by Multimedia Broadcasting Company – owners of JoyNews TV, JoyFM and Adom TV, who broadcast a story alleging complicity of the deployment of soldiers of the Ghana Army, in a supposed illegal mining activity, in the Amansie South District, a WhatsApp message, made the rounds in social media, with the writer claiming to be a soldier.

The WhatsApp message accused the COAS and the General Officer Commanding (GOC), C/COMD – Brigadier General Joseph Aphour, of being shareholders in one of the mining companies operated by some Chinese nationals in the district, and tasking soldiers of the Command (of whom a list of names was included in the message) to provide protection for the company.

Expressing his disquiet of the WhatsApp message at the meeting, General Oppong-Peprah indicated his readiness to submit to any investigation(s) to the facts, urging anyone who suspects his involvement, to check with the Registrar General’s Department or any other regulatory authority.

The emergency durbar, which was aimed at addressing the worrying development within the C/COMD, had one young officer from the audience, being invited to read the authority of the presence of soldiers in the area.

It came to light after the reading that the Amansie South District, by a document dated 13th May 2019, requested the Army to deploy at Tontokrom, to curb the influx of foreigners, whose presence had increased the spate of armed robbery and gun-wielding militia activities within the District, as a result of the activities of one Benvito Mining Company.

Per the facts, Maj Gen Oppong-Peprah, who was then not the COAS, but rather the Chief of Staff at the General Headquarters, was said to have opposed the deployment of standing troops at Tontokrom, thus the military High Command directed C/COMD to deploy OPERATION CALM LIFE, to extend coverage to the Amansie area, to ward off the stated concerns by the district, for which reason, the Army HQ continues to receive situational reports on Tontokrom as OPERATION CALM LIFE.

At the calling of the names on the WhatsApp publication, some were said to be on leave duties, while others were not known to the units of the Command.

During question-and-answer time of the durbar, assuming that any personnel of the lower ranks may be intimidated to clear questions on their mind, the COAS, asked the GOC and the Commanding Officer, 4Bn, to step out to allow troops drown their doubts with ease.

In reaction to the news reportage of Army accoutrements at the mining site and presence of unauthorized military personnel in the area, the COAS expressed concern of some persons purporting to be personnel of GAF, others armed and dressed in desert camouflage, visiting mining sites and extorting monies from illegal miners, between the Western and Ashanti Regions.

It also came to light that some civilians were arrested by personnel of C/COMD in similar dress code wielding arms and claimed to be officials of Environmental Protection Agency (EPA) Taskforce, hence, C/COMD had recently been tasked, to track their activities and get the issues resolved.

General Oppong-Peprah urged troops to desist from acts of character assassination but endeavour to contribute their quota to expand the frontiers of the Army, to address the promotional gaps as well as to improve the livelihood of personnel, and also promised that any unauthorized soldiers operating in the domain, would be arrested and dealt with.

It must be stated that the military personnel spotted in the Multimedia video, although were not part of the VANGUARD team of Police and other personnel, were on authorized duties (OP CALM LIFE), and have been in the area since 2019, and additionally, had been tasked to fish out and arrest any militia group in the Area of Operation.

Meanwhile, the Directorate of Public Relations (DPR) has issued a statement on the matter:

The Ghana Armed Forces (GAF) has in recent days taken notice of media reports alleging that some of its personnel have been involved in providing security for illegal mining operations. The GAF takes such allegations seriously as it does not condone such wrongdoing if true.

Accordingly, a full-scale investigation has commenced into the allegations and appropriate sanctions will be handed out to any person(s) found culpable.

The GAF assures the general public of its unflinching commitment to the national cause. Signed E AGGREY-QUASHIE Colonel – Director Public Relations.