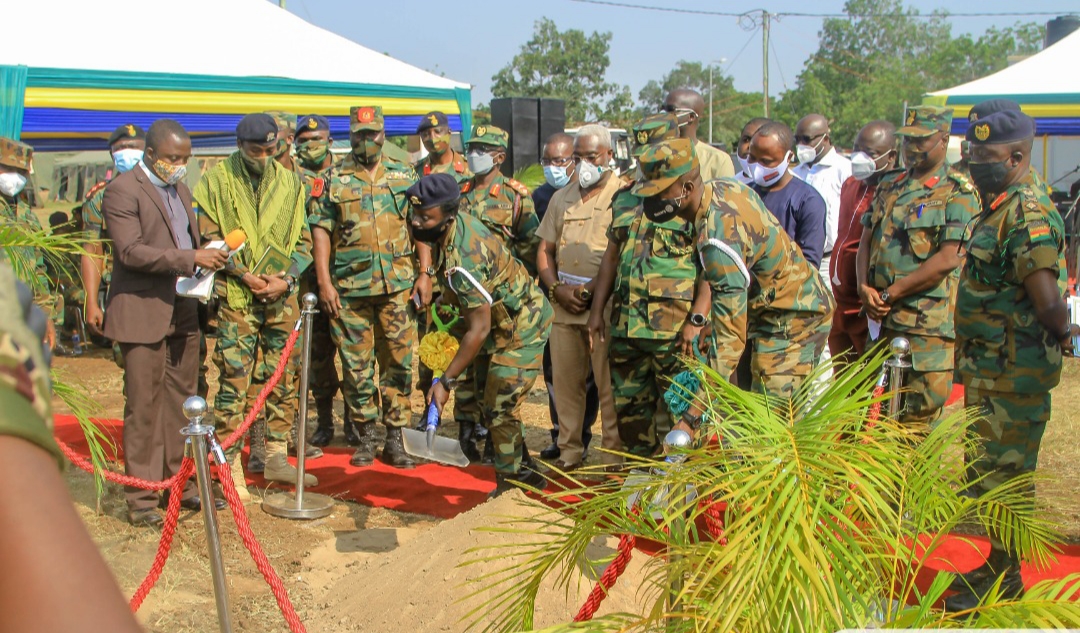 The facilities construction spree for the Ghana Army, under Major General (Maj Gen) Thomas Oppong-Peprah – the Chief of the Army Staff (COAS), continues unabated, with the sod cutting for the construction of a 100-Bed and another 50-Bed accommodation installation, at the Battle Training Camp of the Ghana Armed Forces (GAF), Bundase.

The 100-Bed and 50-Bed projects are separate endeavours, whose groundbreaking ceremony took place on Thursday, 13th August, 2020, and are being built by C&G Group Ltd and Gulf Energy Ltd, respectively, at no cost to GAF and are to be completed between eight to ten weeks.

Speaking at the ceremony, the Chief of the Army Staff (COAS) – Maj Gen Oppong-Peprah reiterated the vision of the Military High Command, to turn the Bundase training facility into a modern one, doing away with the tattered tents that presently, soldiers undergoing preparedness for International Peacekeeping Operations, have to put up with.

General Oppong-Peprah indicated that, to make Bundase become one of the best, if not the best training facility in the sub-region, the development of infrastructure at the training camp, are going to continue in earnest, with facilities, the drainage system and road network, and that the Director-General of Logistics – Brigadier General (Brig Gen) Prince Osei-Owusu, has included the tarring of the training camp roads, as part of the Resurfacing and Asphalting of Barracks Roads.

General Oppong-Peprah used the moment to cite certain companies, who have been of immense help in infrastructure provision, for troops under his command, since he was Commanding Officer (CO) at 64 Infantry Regiment, General Officer Commanding (GOC) Southern Command (S/COMD), and later Chief of Staff, General Headquarters.

The COAS mentioned C&G, who asphalted the S/COMD Headquarters streets and the Square with an amount of GHS 1.2 Million, Mayfair Estates – presently providing a 15-unit dwelling for the Ghana Military Police at Mido Lines, Burma Camp, and Structure and Logistics – who earlier provided a 35-bed accommodation facility at the Bundase Training Camp.

Also cited was Paragon Estates, who have rehabilitated some buildings of GAF, without a charge, and are also constructing a 320-bed facility for Non-Commissioned Officers (NCOs), who would be detailed for Peace Support Operations (PSO) outside the country.

Of the 320-Bed facility by Paragon Estates, Maj Gen Oppong-Peprah communicated the vision to develop the area into a United Nations (UN) Village, where GAF troops from outstations would be accommodated, pursuant to their embarkation on Peace Support Operations, and arrangements made with the Ghana Immigration Service (GIS), to have a desk at the Village, to check-in troops bound for embarkation, hence from that point, they move directly to board the aircraft.

Finally, COAS, General Oppong-Peprah stated categorically that, the mentioned companies are offering such help, in addition to the Government of Ghana’s efforts, in providing for the challenges of the Armed Forces.

Mr Martin Agboyo, representing Gulf Energy Ltd Chairman and Chief Executive Officer – Mr Richard K. Attipoe, who also owns the Legon Cities Football Club, said the military has been good in the protection of the citizenry and his company is excited to be part of a project, that would see to the housing needs of GAF.

“The military has complimented the efforts of Government, in curbing the effects of the COVID-19 health menace, thus their housing needs cannot be ignored. It is our hope that our construction of this accommodation facility, would complement Government’s efforts of housing our men in uniform, to live and work with grace and dignity, in a dignified environment”, Mr Agboyo stated.

Mr Kakra Kojo Duncan of C&G Group, said his organization is proud to associate with the Ghana Army, more especially in supporting the vision of the Army Commander to provide housing and accommodation facilities at the Training Camp, as well as other areas under the jurisdiction of the Ghana Army, to boost and motivate the force’s morale, as they offer service to God and country.