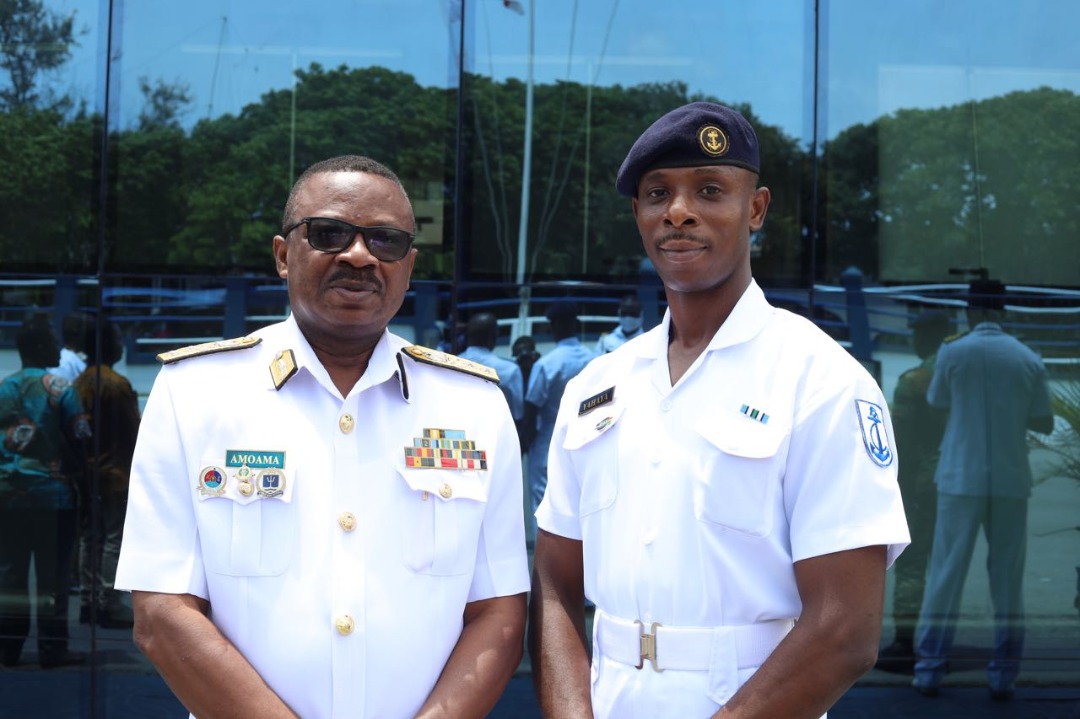 The Chief of the Naval Staff (CNS) – Rear Admiral (R/Adm) Seth Amoama, has expressed explicit satisfaction with the final year project work of Leading Seaman (LS) Yahaya Ibrahim, after he made a 3D Modeling presentation on Military Training and Simulation.

The presentation, which was made mainly for the CNS on Tuesday, 6th October, 2020, at the FAIDOO HALL, Navy Headquarters, Burma Camp, had earlier been made to his Chief Staff Officer and other Senior Officials, who were so enthused with the project that they booked another presentation with the head.

R/Adm Amoama stated that the project is only a springboard of many things that can be done by the Army, Navy and Airforce, to simulate tactical manoeuvres, adding that “projects like this make teaching very easy, and helps students to visualize what they are being taught, instead of struggling to comprehend what is being communicated”.

Admiral Amoama said that the Navy will undertake a major exercise to the Equator, as part of its Ocean Navigation Exercise (which had not been exercised since 1975), and that would present ample opportunity to practice a lot of Fleet and Single Line Formations and some Amphibious exercises, thus LS Yahaya’s project work fits very well into the Service’s agenda, in preparations for the exercises.

R/Adm Amoama also hinted that as the Naval Training Command (NAVTRAC), Nutekpor, in the Volta Region receives a major facelift, the idea of a Simulation Centre would be factored in the infrastructure for training of personnel.

The 3D Modeling Project, captioned “Computer Aided Approach To Fleet Formations And Manoeuvres, In Support Of Naval Training”, is part of LS Yahaya’s study into Multimedia Production, Bachelor of Fine Arts at the National Film and Television Institute (NAFTI), where he discovered that the software’s prime purpose was for military training and simulation and that computer-generated imagery scenes in film making, is rather a plus.

LS Yahaya, thus envisaged 3D modeling as a tool with the potential to support the vision of the Navy – “to maintain a professional and motivated coercive and formidable naval force, which is highly responsive in delivering its mandate of a safe and secure maritime domain conducive for the socioeconomic development of Ghana, while maintaining the time-tested traditions of the Navy”.

Some of the areas LS Yahaya proposes his design could help in the Armed Forces are; Creating a virtual museum to bring back to life historical but non-existent vessels, vehicles and equipment, animate them to portray their features and preserve their peculiar story.

Others are; Fleet Formation by the Navy to organize ships for effective fire power and mitigate enemy attack, Interactive Graphics (War-Gaming) for personnel to have an insight into Exercises and Operations they are to embark on, the deployment of personnel and logistics, and Creating a Firefighting Simulation Centre for training – where fire effects with heaters, could actually be felt by trainees who would be in virtual reality headsets,.

Additionally, Instructional Simulations could be deployed; at the Ghana Armed Forces Command and Staff College (GAFCSC) for both Senior and Junior Division Courses, for Weapon Training and Tactics, Drills (before trainees go to the square) at the Cadet and Recruit training schools, for the Armoured units, to teach engine working parts at the Engineers’ units and for General Exercise Scenarios.

3D Modeling Simulation Centre, though powerful, is quite expensive, but GAF could install its own department or unit in all areas of need, and would be a great deal of cost cutting in training, hence LS Yahaya suggested that “The amount of money that would be used to purchase one Simulator from a foreign company (about $3,000,000, for one Centre), same amount could establish a standardized Simulation Unit, that would produce more of such simulators, to satisfy all units in the Armed Forces”.

Research results have it that military simulation-based training takes away the costs associated with running vehicles, operating weapons and maintaining environment, making it a highly cost-effective solution for the Armed Forces, for actual training requires real equipment, such as operational ships and ARVs, which are expensive to move and a strain on logistics, such as fueling, feeding of troops, the risks of collisions, allowing amateurs to manoeuvre with expensive equipment on the field.

Due to the splendidness of LS Yahaya’s work, he has been shortlisted to participate in the 7th Annual Global Modeling Competition.

LS Yahaya paid tributes to the CNS for permission to access information, Commandant, GAFCSC for access to the military college’s library, Colonel Eric Aggrey-Quashie for granting him enough time for the project, Navy Tactical Instructors and his Project Supervisor – Samuel Owusu Agyemang Duah of NAFTI.