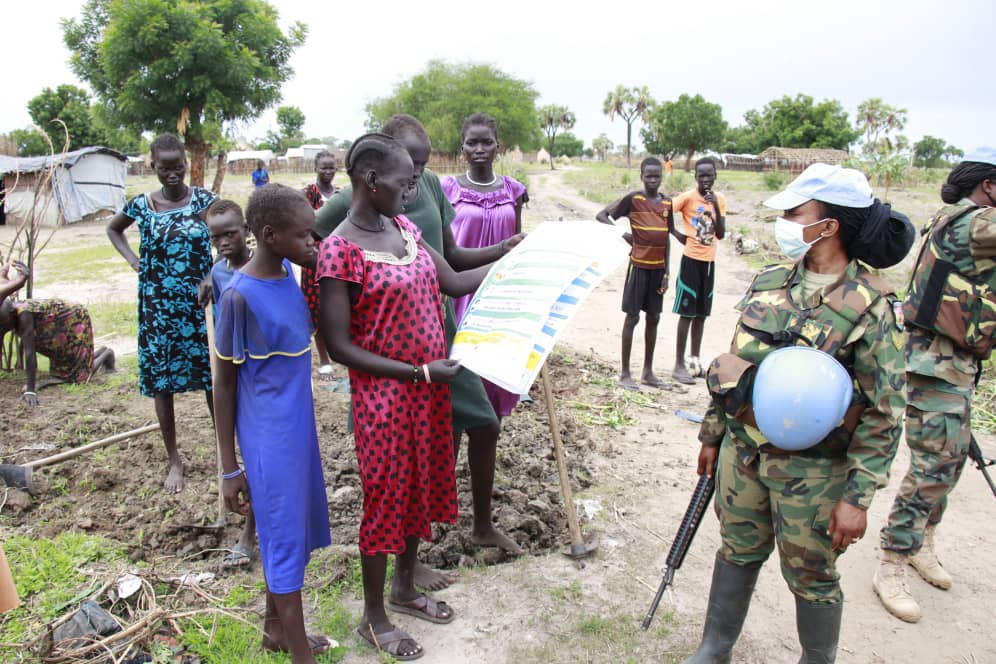 Last Friday, I gave a lecture at the Kofi Annan International Peacekeeping Training Centre (KAIPTC), Teshie. My students were an international group of thirty participants from twelve African countries.

They comprised the Military, Police and Civilians all currently serving in United Nations Missions in Africa. The missions include MINUSMA in Mali, UNMISS in South Sudan, MONUSCO in Congo-DRC, and UNISOM in Somalia.

The course had an interesting acronym HEAT (Hostile Environment Awareness Training). My topic was “Living in and working Conditions in Mission environments).” It was an interactive class in which I made them share their varying experiences, after hearing mine. At the end of the lecture, a student asked me “Sir, can Peacekeeping solve Africa’s problems?” I threw the question back to the class!

I have consistently been asked by a former Chairman of the National Media Commission to educate Ghanaians on what “Peacekeeping” is, considering Ghana’s international reputation as a UN peacekeeping nation, but the lack of knowledge in Ghana on what Ghanaian soldiers do outside.

Happily, we agreed that, while I could introduce it in my articles, a more comprehensive education for Ghanaians falls within the realm of the Directorate of Public Relations, Ghana Armed Forces. However, since I have constantly written that Ghanaians must not create conditions for a UN peacekeeping force to be sent here, I will give the tip of the iceberg on “peacekeeping.”

Although “Peacekeeping” has become the terminology for what should be PEACE SUPPORT OPERATIONS (PSOs), Peacekeeping is only one of several mechanisms under PSOs used by the UN Security Council to ensure international peace and security in failed states using UN troops, police and civilians. Other mechanisms include Peacemaking, Peace Enforcement and Peace Building.

The term “Peacekeeping” was coined by Canadian Foreign Minister Lester Pearson in 1956 when he mediated peace between Israel and Egypt. This was after the forceful intervention by the UK and France to safeguard their interests following President Nasser of Egypt’s nationalisation of the Suez Canal, and Israel’s move into the Suez Canal zone. Armed UN troops of an Emergency Force (UNEF 1) were sent in for the first time since the UN came into being on 24th October 1945.

Conflicts do not erupt overnight. They start with signs of tension which if not addressed early escalate. Here, the UN begins with the mechanism of Peacemaking. Diplomatic efforts are initiated at various levels to bring peace. At the national level, CSOs, NGOs and Peace Councils come together to get the factions to the negotiating table to prevent violence.

Where diplomatic efforts fail because of non-understanding among politicians which in the case of Ivory Coast, Liberia and Sierra Leone led to Civil War, the UN passes a Security Council Resolution authorising Peace Enforcement in accordance with UN Charter Chapter 7, Article 43.1, where UN troops move in with force to stop carnage.
In Cambodia in the early 1990s where there was total breakdown of law and order, the UN formed a government, the Transitional Authority in Cambodia (UNTAC). The Special Representative of the Secretary-General became the “Head of State,” the Force Commander, the “CDS” and the Police Chief the “IGP.”

Is this what politicians want for Ghana with the violence they are busy promoting using dangerously uncivil language?

Sometimes, the UN organizes elections for failed states as we did in Cambodia in 1992. It then stays in the country to supervise peace until reasonableness and sanity return. Like having a big knife wound inflicted across one’s face during violence, surgery may suture the wound. However, the ugly scar will always be a reminder of the violent past. Countries which go down that cliff never recover fully!

Again, is this what our leaders want for Ghana?

Ghana has been universally touted as an oasis of peace in Africa. Why then do we display the medieval mentality of “Divine right of Kings,” striving to join the unfortunate league of African countries which have had UN troops restore law, order and civilization?

To my student’s question “Can peacekeeping solve Africa’s problems?” the class answered in a resounding NO!
While UN troops may temporarily fight to push out rebels, establish road blocks, patrol and reconstruct infrastructure, the UN cannot permanently impose peace on a country whose leaders choose to kill for power.

They opined that, it is irresponsible for politicians to selfishly push a country into lawlessness while citizens look on passively, and expect the UN to waste resources solving self-inflicted problems! Indeed, it has been insinuated elsewhere, “Africans must solve their own problems!”