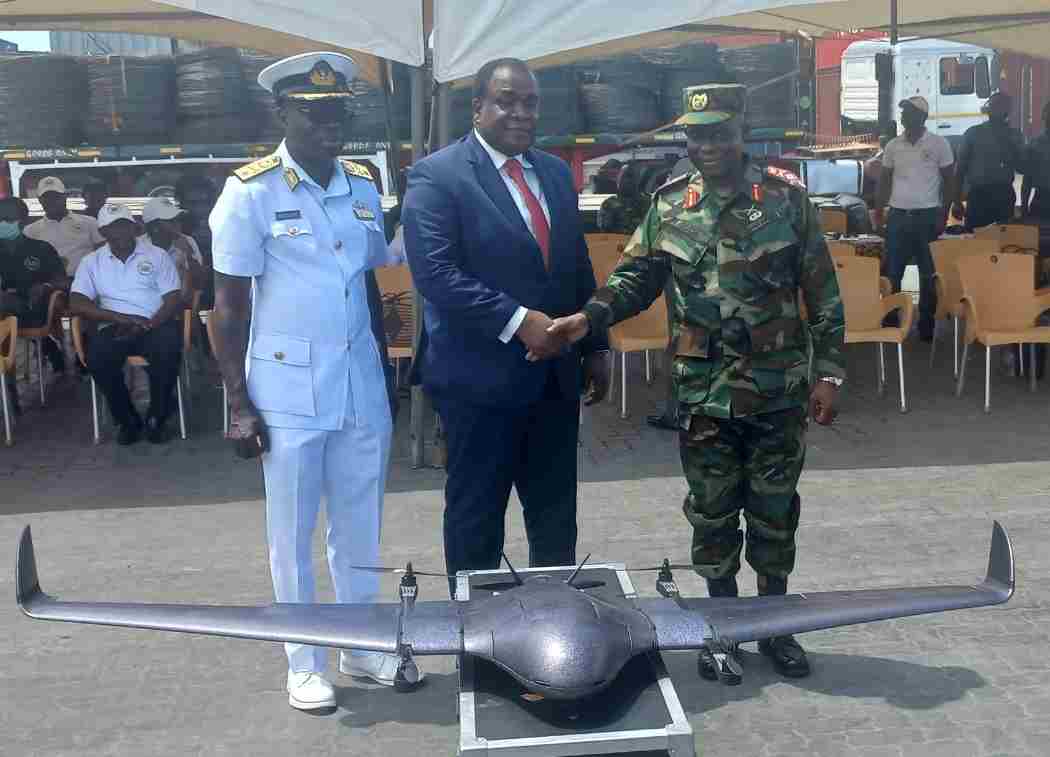 The drones were commissioned by the trio at the Marine Dock, Tema Harbour, on Wednesday, 26 October, 2022 for use by the Navy (who have in recent times established a Drones’ Squadron), in its Eastern and Western Commands.

Major General (Maj Gen) Emmanuel Kotia – GhBC’s National Coordinator, stated at the commissioning ceremony that “the key characteristics of a state is that it should have defined boundaries – which means that the state needs to know where its demarcations are on land, sea and air”, and that without defining the territorial boundaries of Ghana, the security agencies would not be able to carry out their main tasks.

He listed a few of the mandates of the Commission as stipulated in Ghana’s ACT 795: 1) To undertake negotiations to determine the land boundaries of Ghana with its neighbouring countries, 2) Delimit the maritime boundaries in accordance with the principles of international law [under which the drones outdooring function falls], 3) Collaborate with relevant security agencies to ensure the security of Ghana’s boundaries, 4) Safeguard the territorial sovereignty of Ghana and 5) Negotiate cross-boundary matters among communities along the various boundaries.

The General also stated that GhBC and the Navy shall jointly organize maritime boundary inspections with Ghana Navy Ships (GNS) on the Eastern and Western Maritime Domains, aided with maritime drones, and added that GN released their facilities in Sekondi, in the Western Region of Ghana, for the training of GhBC’s Survey and Delimitation Department for its incision of drones.

Upon demonstrating how the UAVs launches on the GNS GARINGA, Maj Gen Kotei high-mentioned the Chief of the Naval Staff (CNS) – Rear Admiral Issah Adam Yakubu – for his progressive ideas for the collaboration between the Commission and the Navy.

The General further gave some features of the newly acquired UAVs as fixed-wing drones, fitted with vertical take-off and landing capabilities, LiDAR data dual camera – first time such camera technology is being deployed in Ghana – with flying-time of 410 minutes, maximum speed of 100 kmph, cruise speed of 65 kmph and maximum altitude of 4000 meters.

The outgoing Flag-Officer-Commanding (FOC), Eastern Naval Command (ENC) – Commodore (Cdre) Emmanuel Ayesu Kwafo, in a welcome speech to the ceremony, said the Gulf of Guinea has been bedeviled by a number of maritime crimes which include piracy, smuggling, unreported unregulated illegal (UUI) fishing, and that the transnational nature of some of the crimes mentioned makes the surveillance of Ghana’s maritime borders imperative.

Referencing a directive of the CNS, Cdre Kwafo said GN has made several efforts to modernize its operations by leveraging on technology to improve security in Ghana’s waters, and that the incorporation of drones in joint operations with the Navy’s partners, are both commendable and timely.

He said in readiness to introduce drone technology to its operations, GN, with the support of the SOKO AERIAL ROBOTICS SCHOOL, have trained some Officers and Sailors in drone pilotage and maintenance to make the operations of the Navy seamless.

The FOC said the drones would be used to conduct regular and efficient assessment of Ghana’s maritime boundaries by providing intelligence, surveillance and reconnaissance information, which would in turn inform operational decisions along the chain-of-command.

He concluded that the financial implications of such collaborations and objectives are huge, and that in the context of the collaboration, it is worthwhile for stakeholders to pull resources together to help achieve a common objective.

The Deputy Chief Executive Officer, Finance and Administration, GNPC – Mr Benjamin Kweku Acolatse, who was Special Guest at the event said the corporation finds all its producing oil assets within the offshore marine environment, and thus it recognizes the need to have a secured well-monitored and well-developed marine space in which its assets; the Floating Production Storage and Offloading (FPSO) vessels, pipelines, and other infrastructures are secured from unwanted marine traffic and other illegal activities.

He further opined that with over USD 8 Billion of hydrocarbons produced within the past 12 years accruing to the Ghana Group, there has always been the need to collaborate with stakeholders to secure the resource area, which continues to generate income for Ghana, for which reason GNPC is working actively with GN and GhBC, Ghana Maritime Authority, among others, to manage and secure all activities within Ghana’s Exclusive Economic zone (EEZ).

Mr Acolatse stated the expectations of his organization of the collaboration as detecting and monitoring vessels remotely, surveilling and tracking of suspicious activities, remote, offshore or isolated sites, right-of-way and secure zones, vandalism and trespassing, combating illegal de-bunkering, theft and piracy, with the UAVs.

GNPC has historically funded the activities of the GhBC, which led to the historic success achieved in the maritime boundary dispute with Ivory Coast, and is working with the Ghana Navy, towards decommissioning of Ghana’s first oil field – the Saltpond Oil Field, in the Central Region of Ghana.