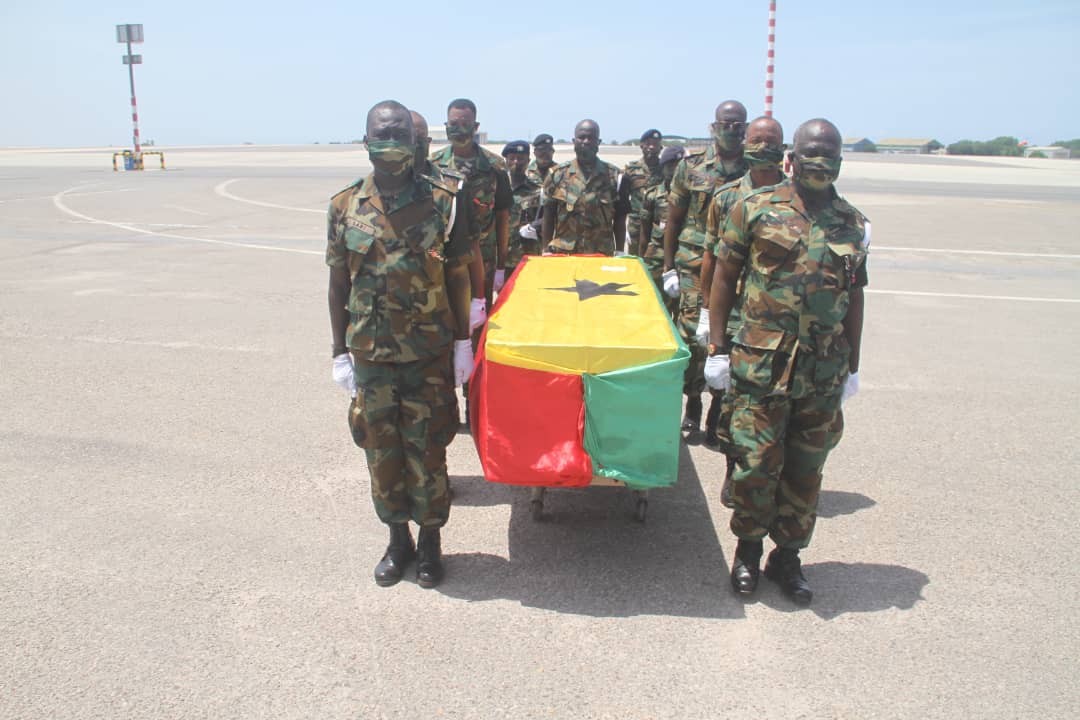 The mortal remains of the late Warrant Officer Class 1 (WOI) Ackah Patrick, who passed away after a short illness on 28 April 2020 in South Lebanon while deployed with the 86th Ghanaian battalion serving with the United Nations Interim Force in Lebanon (UNIFIL GH86), has been flown home on Friday 15 May 2020.

Personnel of 64 Infantry regiment, which is the home unit of the deceased, formed a bearer party team to convey the remains from the airport to the 37 military hospital for preservation.

WOI Ackah Patrick passed away on 28 April 2020 while serving with UNIFIL GH86 in South Lebanon after a short illness. He was born on 15 February 1969 to the late Mr Anthony Ackah Tanoe and Madam Mary Magdalene Ackah at Half-Assini in the Western Region of Ghana.

He attended Nsein Senior High School, where he attained his middle school leaving certificate. He was recruited into the Ghana Armed Forces on 1 June 1992 as a driver and served a total of 28 years in the military with pride and dedication until his untimely demise.

He was a veteran peacekeeper who participated in various peacekeeping operations including Economic Community of West African States Monitoring Group (ECOMOG), United Nations Organization Mission in Congo (MONUC) and the United Nations Operation in Cote D Ivoire (UNOCI). He had previously served with UNIFIL GH58 in the year 2003 and UNIFIL GH 70 in 2009. His tour with UNIFIL GH86 makes it his third time in South Lebanon. His exemplary conduct in the military earned him the long service and good conduct medal.

A memorial service was held on Thursday 14 May 2020 at the Ghanbatt Headquarters, Position 5-66 Al Qawza, where he was posthumously awarded the UN Peace medal for his contribution to the peace efforts in South Lebanon, while the Lebanese Armed Forces (LAF) also awarded him the Lebanese medal. The memorial service was attended by the UNIFIL Force Commander, Maj Gen Stefano Del Col, Ghana’s Brig Gen Irvine Nii-Ayittey Aryeetey, who is the Deputy UNIFIL Force Commander, the Sector West Commander, Brig Gen Diego Fulco and representatives from LAF.

He was survived by a wife (Gloria) and two children.