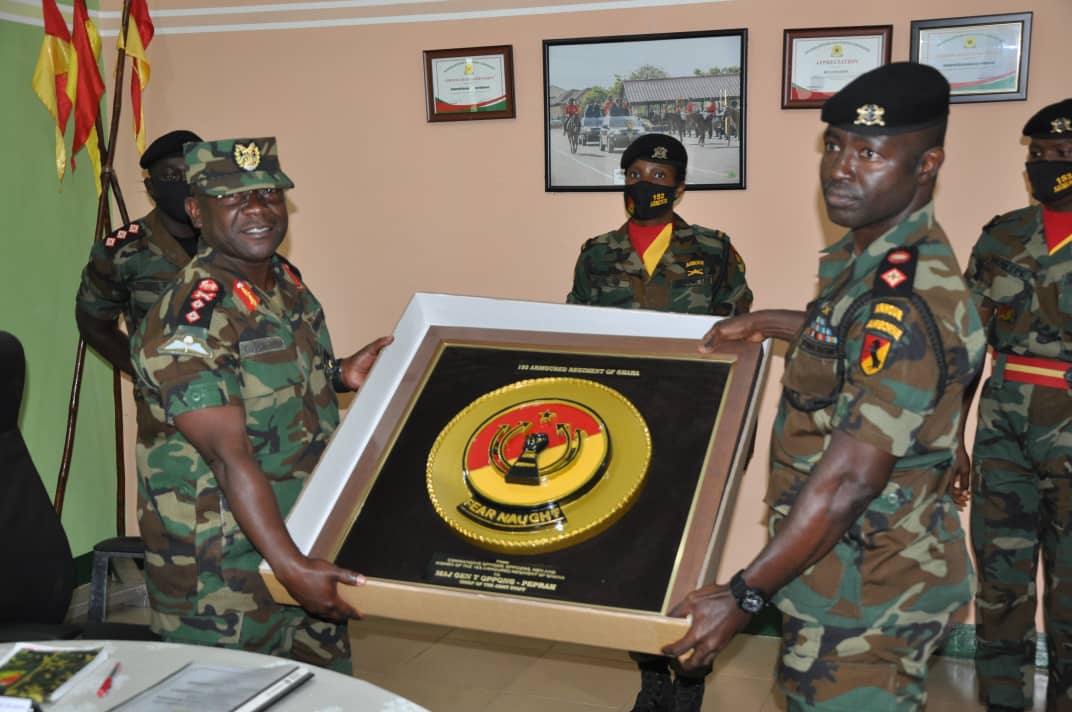 The Army Commander – Major General (Maj Gen) Thomas Oppong-Peprah, has revealed the intention of the Military High Command to urgently recruit to increase Ghana Army’s human resource, in order to operate at optimal capacity and to resolve the manpower challenge in the Army.

The Chief of the Army Staff (COAS), was on a familiarization tour of the Headquarters of Southern Command (S/COMD), a formation of the Ghana Armed Forces (GAF), and four units under it – 48 Engineer Regiment, Teshie, the 153 Amoured Regiment, the 64 Infantry Regiment and the Five Battalion of Infantry (5Bn), Burma Camp, on the 14th and 15th of September, 2020.

The COAS, reiterating the importance of training for individual troops as well as the generality of the Army, urged commanders of the Army, to lead by finding lasting solutions to the many challenges facing their commands and units.

As part of his vision to modernize the Army, the COAS restated that the Ghana Army will collaborate with their counterparts in other countries, such as Germany, the United Kingdom (UK) and the United States of America (USA), to retrain, as a way of building capacity of troops and opening them up to current military trends and standards.

At an All Ranks durbar at the Arakan Presby Church, Burma Camp, with personnel of 5Bn, Maj Gen Oppong-Peprah posited that, the terrorism threats along the northern borders of the country, required proactive and visionary leadership, to ward off such threats; hence the novel operation code-named ‘Operations Conquered Fist’ and ‘Exercise Eagle Claws’.

General Oppong-Peprah cited a number of measures taken by the Military High Command, to alleviate the challenges facing troops, such as the construction of a UN Village, an ultramodern accommodation facility at the Bundase Battle Training Camp, construction of Young Soldiers’ accommodation across the units and the renovation and reconstruction of the Army Recruit Training School (ARTS) at Shai Hills.

General Oppong-Peprah additionally mentioned the Army Headquarters’ recent restoration endeavour of repairing a number of vehicles, supporting various units and regiments with the repairs and maintenance of their vehicles for routine duties.

The Army Commander, citing more projects being undertaken, said the purpose of the many projects, is to resource all the units to fully operate at their best capacity and ensure the welfare of troops, and also pledged support for various units’ projects.

On ensuring peace in the upcoming general elections 2020, the COAS admonished personnel to brace up for ‘Operation Peace Trail’ and advised troops to avoid the risk of being influenced by politicians, but remain professional and dedicated to their mission.

At 153 Armoured Regiment, the COAS was honoured with some souvenirs as ‘the Most Senior Officer of the Corps’, by the Commanding Officer (CO) – Lieutenant Colonel William Ackah, and at 64 Infantry Regiment, the General commissioned a new welfare bus purchased by the unit.