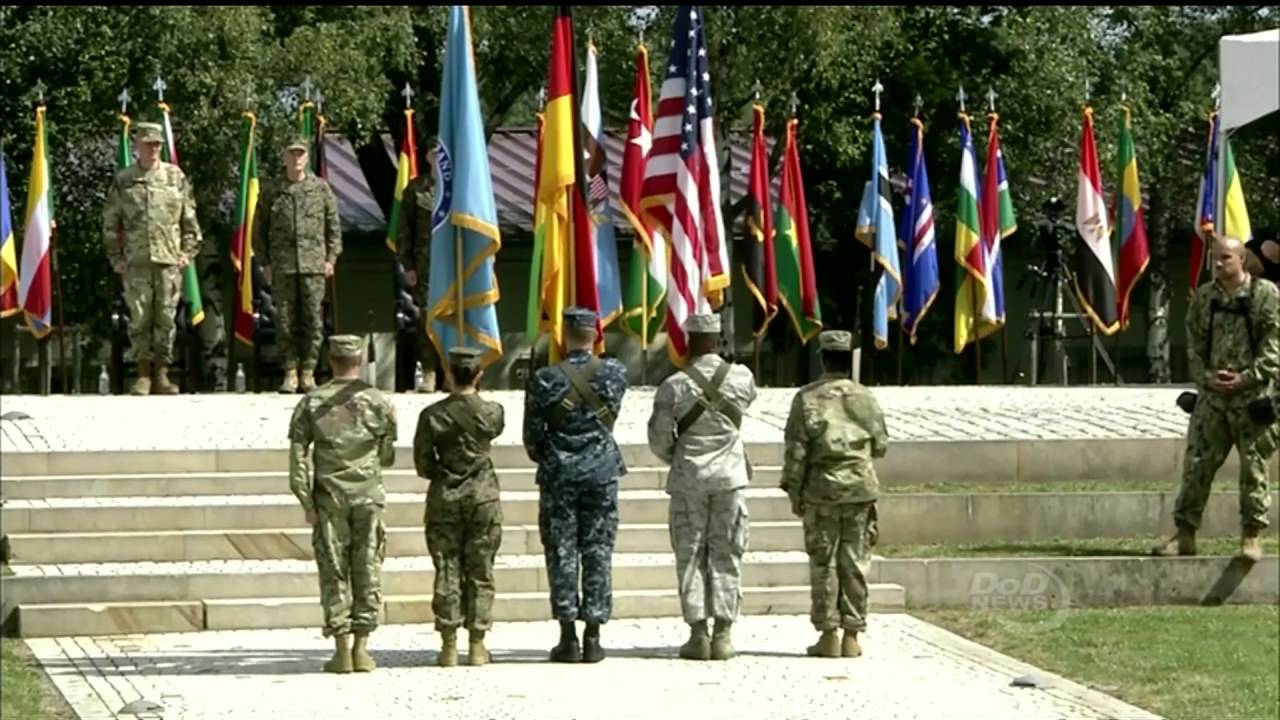 The Joint Operations Center at the United States Africa Command (US AFRICOM) Headquartered in Stuttgart, Germany, has launched a search for a new home, after the Command was ordered to plan to move out of Germany, AFRICOM Commander – Army General Stephen Townsend confirmed in a media release.

AFRICOM was established in 2007 by US former President George Walker Bush, where an earlier plan to move the headquarters to Africa caused a considerable political backlash from African leaders, over concerns about the militarization of U.S. foreign policy toward the continent. Since then, Stuttgart has been an interim headquarters, with the intention of selecting a permanent location later.

This is the latest move by the President of the United States, His Excellency Donald John Trump, to pull U.S. troops and resources from a key European ally, as President Trump continues to blame Germany, for not contributing enough to its own defence.

Pentagon (the US Defence Ministry) officials briefed the media in a presser, after which the President answered questions about Germany and the North Atlantic Treaty Organization (NATO), and there gave his reason; “Germany is not paying their bills. They’re delinquent. It’s simple.”

HE President Trump has grown increasingly frustrated with Germany over a number of issues, including its continuing failure to meet NATO’s defence spending requirements and over the $11 billion Nord Stream 2 pipeline, set to export natural gas directly from Russia to Western Europe, “They’re spending billions of dollars to buy Russian energy, and then we’re supposed to defend them from Russia,” President Trump said while hosting Polish President Andrzej Duda at the White House.

“We don’t want to be the suckers anymore, other NATO countries also could see U.S. troops leave if they do not increase defence spending”, Mr Trump added.

The US Defence Secretary – Mark Esper, thinks that Germany is the wealthiest country in Europe and, therefore, “can and should pay more to its defence, it should certainly meet the 2 percent standard, and I would argue, go above and beyond that.”

Defence Secretary Esper further announced that nearly 12,000 U.S. troops will pull out of Germany as soon as is feasible, out of which 5,600 will be re-positioned to other European countries and the remainder sent to other US Bases, which are yet to be determined, and there are currently 1,200 military personnel assigned to AFRICOM headquarters in Stuttgart, Germany.

Germany is currently home to about 38,600 U.S. troops and numerous installations, including Ramstein Air Base and five of the U.S. Army’s seven European garrisons, in addition to Stuttgart, which is home to both the EUCOM and AFRICOM, and the relocation affects EUCOM headquarters, along with U.S. Special Operations Command Europe, from Stuttgart to Belgium, additionally, 2,500 U.S. airmen who had been scheduled to deploy to Germany from an airbase in Britain, will now stay in Britain.

A non-mandatory target has NATO members paying 2 percent of their gross domestic product (GDP), toward shared security costs by 2024, but for Poland, who is paid up, few NATO members are meeting that benchmark, including Germany, who were expected to pay about 1.38% of her GDP in 2019, so are Italy and Belgium ― who paid an estimated 1.22% and 0.93%, respectively, in 2019.

As Germany ponders the effects of the leave of the US troops, Latvia and Poland are making bids to receive the moving troops into their country, as the Latvian Defence Minister – Artis Pabriks said that his country is willing to host U.S. forces, “We are ready to invest, to receive also a certain amount of American troops on Latvian soil”, during the virtual European Union Defence Forum.

Ordinarily, a layman would assume that the next possible location for such an HQ to operate for security issues on Africans should be an African country, however, General William E Ward – Commander of US Military Forces in Africa, said any move to establish an American military headquarters of more than 1,000 people somewhere in Africa would create more problems than it would solve.

When AFRICOM was first established, it encountered a lot of resistance among Africans, who were concerned it would militarize U.S. policy toward the continent and make American military intervention more likely, but General Ward and his staff have worked hard to ease those concerns, and he indicated that moving the headquarters could renew them.

At a U.S. Senate hearing in Washington, General Ward stated that “If our work is to be about increasing the capacity of African nations, it’s our programs, our activities that we do in about 38 different countries right now, that’s the important part. And the effort to find a location, with all the other associated issues, would be distracting to the real work of the command, that is, through our programs”.

General Ward said AFRICOM focuses on training African armies and government civilians, to establish security and stability in their countries, in an effort to prevent criminals and terrorists from establishing themselves, in addition to naval training programs that help fight piracy, smuggling and other maritime crimes.

General Stephen Townsend seems to agree with General Ward –”It is my estimation that any great effort to locate an American-size headquarters of that nature, would probably be more counter-productive than productive. However, regardless of the headquarters location, AFRICOM will continue to work with our African and other partners to address mutual interests.”

“It is important our African partners understand that our commitment to them remains strong, U.S. Africa Command will continue to work with our African and other partners to address mutual interests”, General Townsend said.

Some analysts however disagree with the American attempt and further warn that if the plan goes through, there will be other costs, as well; Germany hosts important logistical, command and control centres for the US military and has been a very important hub for U.S. operations in North Africa and the Middle East and that if personnel is reduced from these hubs, response time would be slowed.

The command could move elsewhere in Europe or even to America.