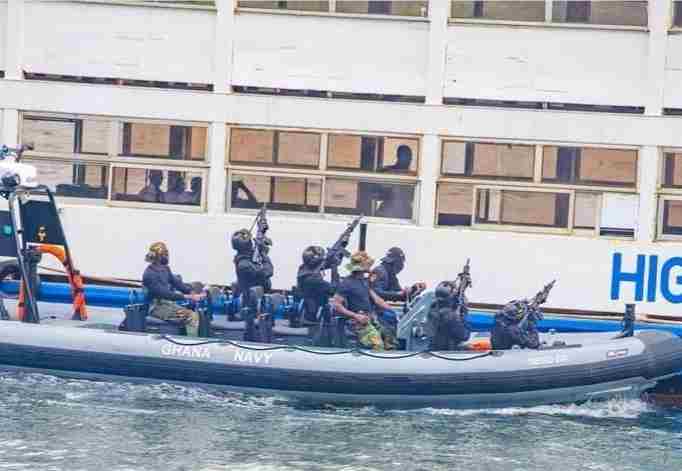 The rigorous half-year training regime spawned 8 out of 25, to be the first batch of GN’s SF operatives to be trained on Ghanaian soil, who demonstrated a few drills at their graduation ceremony held on Thursday, 15 September 2022, at NAVTRAC, Nutekpor, in the Volta Region of Ghana, with the Chief of the Army Staff (COAS) – Major General (Maj Gen) Thomas Oppong-Peprah as the Guest-of-Honour.

The COAS, who represented the Chief of the Defence Staff (CDS) of the Ghana Armed Forces (GAF) – Vice Admiral Seth Amoama, emphasized the utmost need of the SBS that; in modern military setups, the establishment of Special Operations Forces has become a priority, as SFs remain one of the most flexible and useful instruments in a country’s national security toolbox, that can be used to protect vital national interests.

General Oppong-Peprah furthered that if one considers that, economic activities in Ghana’s maritime domain keep increasing, with especially the Oil and Gas, fisheries sectors, being accompanied with dynamic and complex maritime security challenges, then GN’s quest to possess an elite, well-trained, well-equipped force, capable of conducting all kinds of maritime interdictions in specialized operations, cannot be over emphasized.

Referring to the SF as “Quiet Professionals”, the COAS said they are required since modern threats to peace and socioeconomic existence are threatened in an asymmetric nature, which makes it difficult for conventional forces to surmount, citing trans-national crimes as piracy, armed robbery and kidnapping at sea for ransom, terrorism and drug trafficking in the Gulf of Guinea, as continuing to pose significant threats to national and regional maritime activities, at a great cost to economies of the Gulf-of-Guinea countries.

He averred that the commencement and completion of the indigenous training of the elite and robust force – with support from the United States (the United States African Command – USAFRICOM) and the Danish (the Danish Frogman Corps) governments – gives Ghana the opportunity to sustain the development of Special Operations Units in the GAF in general, and the Navy in particular.

“It is important to look at the role leadership is playing in this whole project. I, therefore, wish to use this occasion to commend the Chief of the Naval Staff (CNS) – Rear Admiral (R/Adm) Issah Adam Yakubu and his predecessors, for turning the dream of establishing a Special Operations Unit in the Ghana Navy into a reality”, Maj Gen Oppong-Peprah concluded.

The CNS – R/Adm IA Yakubu – commended the Ghana Army (GA) for the use of the Army Special Operations Training School (ASOTS), Daboya, and the Ghana Air Force for provision of air support, in the training of the SBS, and urged for continued collaboration between the three Services of GAF.

The conduct of the SBS training in Ghana is one of the key conditions required to achieve the objective of capacity building in the Special Boat Squadron 5-year Development Plan, which is up to 2026, and was drawn by the Tripartite Partnership of the GN, the Danish Naval Special Warfare Group (Frogman Corps) and the USAFRICOM.

The new graduands are the second batch after the first batch who formed the nucleus of GN’s SBS, were trained in the Federal Republic of Nigeria, by the Nigerian Navy (NN).