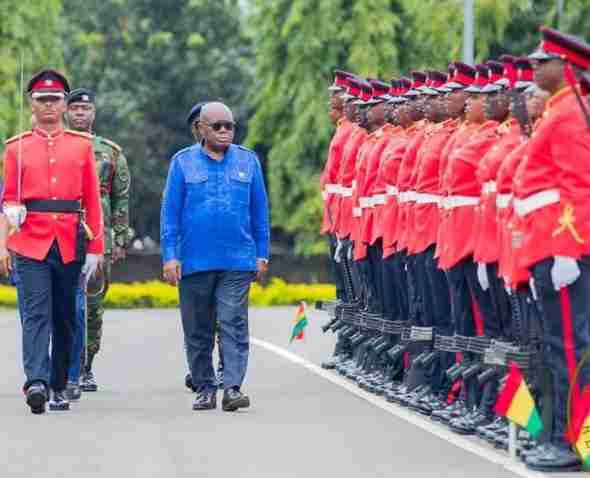 66 Artillery Regiment (66 Arty Regt) – The Gunners – a Unit under the Ghana Army, honoured the Commander-In-Chief (C-In-C) of the Ghana Armed Forces (GAF) and President of Ghana – Nana Addo Dankwa Akufo-Addo, with a full Guard-of-Honour with 21-Gun-Salute at the Volta Barracks, Ho, when he historically visited the Regiment as the first C-In-C since 2004.

As part of his 2-day Presidential working visit of the Volta Region from 12 to 13 September, 2022, the C-In-C paid the historic visit on the second day, which counted as second to the first time when then President John Agyekum Kuffour visited the Regiment 18 years ago, on 18 February, 2004, to present the Regiment with its Colours.

The President was received to the Barracks by the General Officer Commanding (GOC), Southern Command – Brigadier General Michael Ayisi Amoah and the Commanding Officer (CO), 66 Artillery Regiment – Lieutenant Colonel (Lt Col) Edward Sarpong Appiah, and was given a security brief by the CO and other members of the Volta Regional Security Council (REGSEC), after the honour and exchange of pleasantries.

The President also participated in a durbar, to which he was ushered by the CO, Artillery Training School – Lt Col Kwame Sam Appiah – a function which was constituted with personnel of the various security agencies within the Region where the C-In-C stated that, his visit was as a result of a decision he made to interact more with security agencies in the country.

He admonished the various security agencies to collaborate effectively with each other in order to maintain the peace and security within the Region, and also build and maintain good relations with the civilian populace in order to gain their cooperation to achieve success, reminding his audience that his Administration had done a lot in equipping the security agencies, and was still doing all within its power to provide adequate logistics to facilitate their work.

The CO of 66 Arty Regt – Lt Col ES Appiah later presented the C-In-C with a plaque and a 105mm Howitzer ammunition shell – which was fired during the 21-Gun-Salute – as honorarium.

The President was accompanied by Ghana’s Minister for Information and Member of Parliament (MP) for Ofoase-Ayirebi – Kojo Oppong-Nkrumah, Minister for Roads and Highways and MP for Atiwa West – Kwasi Amoako-Atta, National Security Advisor – Brigadier General Emmanuel Okyere (Rtd) and some personalities in government.