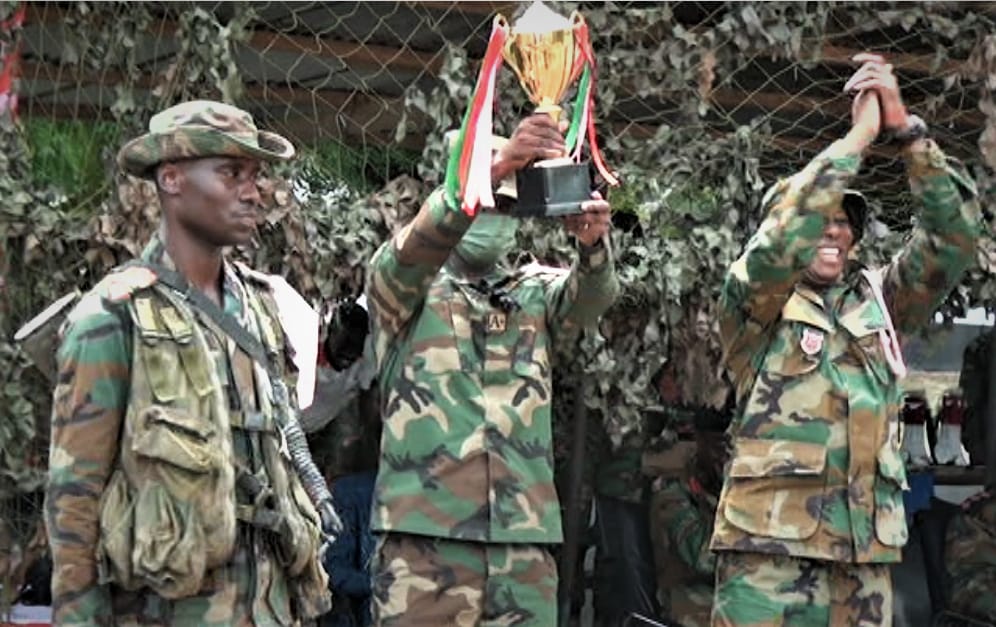 In a message read on the behalf of the Chief of the Army Staff (COAS) of the Ghana Armed Forces (GAF) – Major General (Maj Gen) Thomas Oppong-Peprah, to participants on the final day, by the Army Chief Staff Officer (CSO) – Brigadier General (Brig Gen) Charles Agyemang-Prempeh, he stated how the 2-day field exercise fits into his vision to have an Army well-trained, highly motivated and well-equipped with quality officers and soldiers, to achieve the task of the Army.

The Army Commander emphasized that his vision cannot be achieved without vigorous trainings and competitions, which largely elicit desired qualities necessary to deal with existing and emerging threats to Ghana’s peace and stability.

General Oppong-Peprah urged that competitions such as March-and-Shoot be made a part of the annual training calendar of the commands, to enhance operational readiness, while meeting demands of modern military roles and responsibilities.

The COAS then commended S/COMD that in spite of scarce resources, numerous operational commitments and the threats that COVID-19 continues to pose, they found the resources needed to successfully organize a key event in their 2022 training year.

On commencement day of the field exercise, Brigadier General (Brig Gen) Matthew Kweku Essien – Commander, Army Special Operations Brigade (ASOB), who was the Guest-of-Honour, dwelt of the fact that, it becomes a consequent duty of the general public, to complement the efforts of the security services at preventing insurgency anywhere, since it virtually suffers the resultant assassinations, brutalities, intimidations, robberies, hijacking, arson and related crimes.

General Essien surmised therefore, that the general public owes it a duty to provide timely information, about the movements and activities of suspected insurgents to security agencies, so that they can be dealt with decisively.

Brig Gen Essien opined that the Army alone cannot eradicate insurgency, neither can insurgency be eradicated without the Army, hence the need for collaborative efforts amongst the units of the Army, and with other security agencies, through training, to test abilities to deal with such threats, to assist the civil authorities to maintain law and order in affected areas.

In an interview, the General Officer Commanding (GOC), S/COMD – Brig Gen Michael Amoah-Ayisi further explained the need for regular training exercises, considering the varied terrain his charges have as their areas of responsibility, in anticipation of possible eventualities that could occur.

The GOC also stated that, considering the exercise as a sort of end of season scrutiny, Ex Kullum Shirri tests how well troops have assimilated all the trainings taught during the first quarter, and also gives assurance to the general public that the military is in a perpetual mode of training, and not redundant.

He also touched on the need for the Army to be effective by practicing with what equipment and knowledge they had acquired over time, thereby uncovering limitations and inefficiencies, for antidotes to be procured.

Further on the essence of training, General Amoah-Ayisi said when the potential enemy knows that the military is constantly training, it keeps them at arms’ length and helps to keep the stability of the nation, and that as reports of terrorism are close to the borders of Ghana, coupled with threats like the Western Togoland secessionists.

In a march-and-shoot exercise, whereby navigation and obstacle crossing tests come in handy, it prepares the troops for the assault on the environment degrading Galamsey activities, where troops have to trek very long distances, cross rivers, inserted from the skies to perform assigned tasks, the Army General said.

On Ex Tiger’s Path, Brig Gen Amoah-Ayisi said there are three Commands in the Ghana Army – Southern, Central and Northern, then there are the Navy and Air Force Commands, with each command training in their area of responsibility, however, since cooperation from all Commands is required to execute national mandates, they could be required to train together and be conversant with each other.

The objectives of Exercise Kullum Shirri ‘22 were; to test a cross-section of the Formation’s capability to carry out detailed planning, execution, command and control of long-range patrols in internal security encounter setting.

Secondly, to test the navigational and obstacle crossing and marksmanship of a platoon size force on a semi-independent operation; thirdly to improve individual physical fitness and endurance; fourthly, to enhance cooperation, unit-pride and esprit de corps among Southern Command units, towards building capacity for joint operations.

In the contest, the various commanders of Platoons were called individually and given specific tasks, they had to start battle preparation to execute the task, after their kits were inspected to weigh 15 kilograms, Orders delivered to respective Platoons by their commanders, after which they commenced their navigation towards the objective, retired into a patrol base and rested to plan for subsequent operations.

The next day, each Platoon continued their operation by navigating a total of 20.5 Kilometers to the Asutsuare Training Camp, where upon arrival, they had to contend with crossing 10 obstacles within a given time, after which they ended up at the Ogyefo Firing Range, to fall as many out of 10 metal plates, within a distance of 100 meters, in their best times.