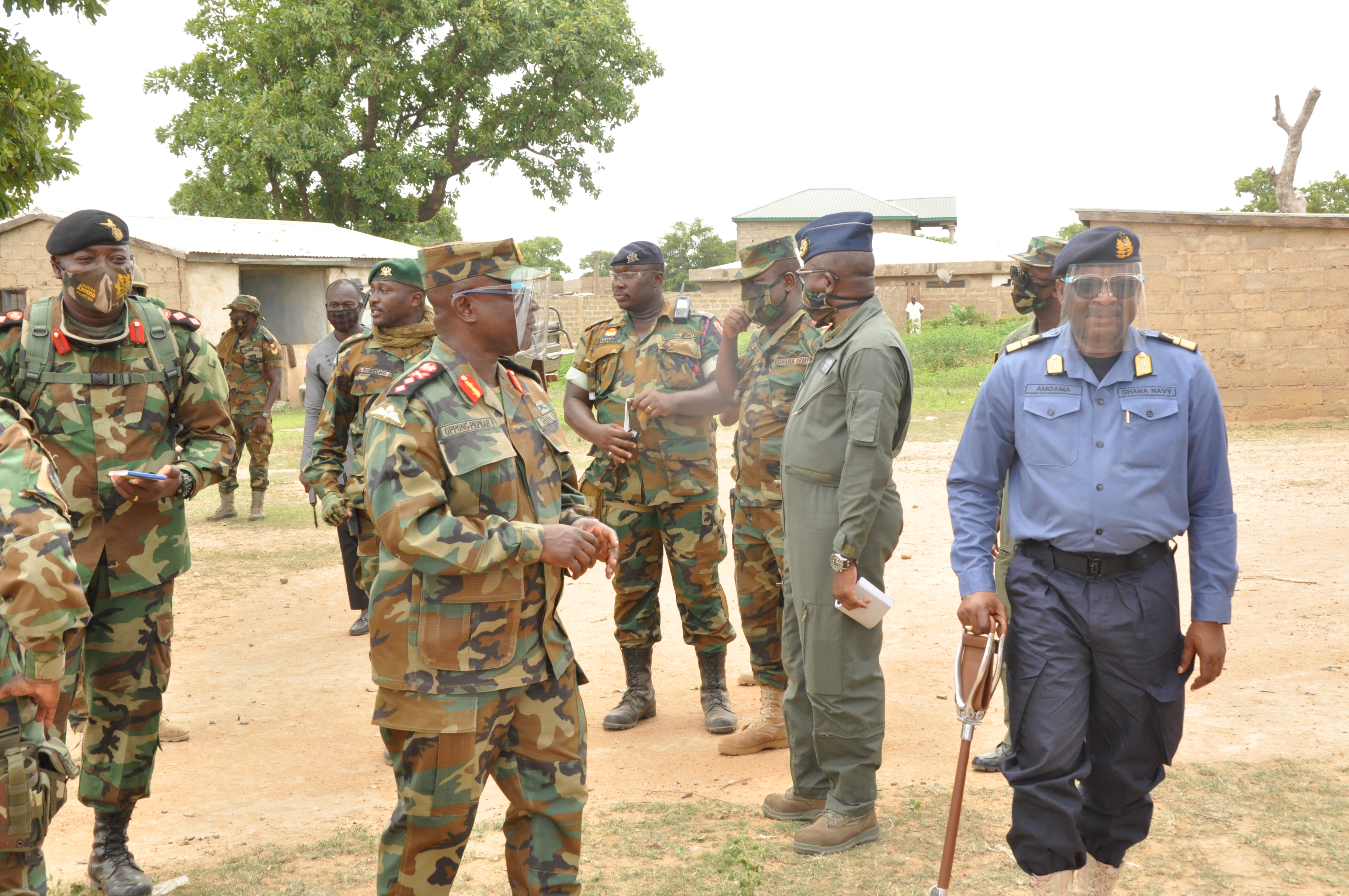 The Ghana Armed Forces (GAF) has commenced a 4-day Field Training Exercise codenamed “Ex Eagle Claws ’20” for the Army and Air Force, aimed at training, testing and preparing the participants of OPERATION CONQUERED FIST – meant to ensure sanity in the northern sector of the country, in terms of possible terrorist and contemporary threats.

The 4-day training which started on Monday, the 22nd June 2020, involves troops from GAF’s Northern and Central Commands, who have been deployed to serve on Operation Conquered Fist and would focus on the Upper East and Upper West Regions of Ghana, with locations including Widana-Polmakom, Sapeligah, Zebilla, , Paga Tumu, Gwollu and Hamile, among a few others, which are mainly border settlements.

Speaking to the troops at one of the exercises on Day-1 at Widana-Polmakom (a typical border town) in the Upper East Region, the Chief of the Naval Staff (CNS) – Rear Admiral (R/Adm) Seth Amoama, who led the a high-powered delegation of the Military High Command, acknowledged that the nation faces several threats, which includes COVID-19, which seems to have overshadowed other existing threats.

R/Adm Amoama urged all troops to practice well, by training regularly and constantly, so that the military would improve upon its skills and stay at its core mandate and be a formidable and very credible deterrent force to every all threats.

The Chief of the Army Staff (COAS) – Major General Thomas Oppong-Peprah, who envisioned the 4-Day training, in addressing another set of troops at Paga, also in the Upper East Region, said that the Military High Command has set out to identify the short falls in the performance of duties by personnel, in terms of equipment.

Maj Gen Oppong-Peprah further indicated that the exercise is good for the soldier’s personal protection, when performing duties, and that the exercise would continue from time to time, whiles provision is made for all the equipment which are lacking in the current training.

‘Ops Conquered Fist’ is primarily made up of a number of security agencies led by GAF and includes the Ghana Police Service, Ghana Fire Service, Ghana Immigration Service, Customs Division of the Ghana Revenue Authority, Bureau of National Investigations, the National Ambulance Service and the Ghana Forestry Authority.

The aims of ‘Ex Eagle Claws’ is to help reinforce the capabilities of security agencies, that are participating in ‘Operation Conquered Fist’.

The success of ‘Operation Conquered Fist’ would mean that security in Upper East and Upper West Regions, would be reinforced and the safety of the ordinary citizen would be assured to go about their businesses, day by day activities and be happy.