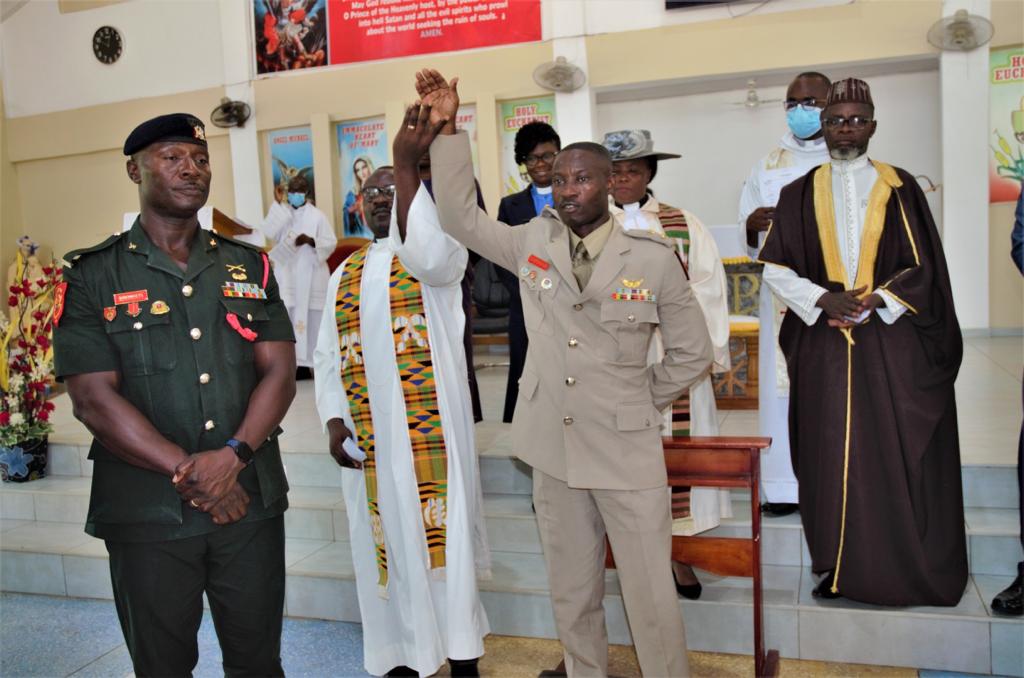 The CO took the opportunity to outline his vision, mission and plan of action for the “Ready and Willing” Unit, during his tenure of office, at the service which was held at St Michael’s Catholic Church, Michel Camp, Tema, on Sunday, 29 May, 2022, under the theme “Chosen to Serve God and Humanity through Armed Forces”, with the Guest of Honour being the General Officer Commanding, S/COMD – Brigadier General Michael Amoah-Ayisi.

Lt Col Ampomah who assumed office on 11 March, 2022, has a vision ‘‘To build a highly professional Unit that is dependable and efficient with operational excellence and mission accomplishment as its top priority’’, and a mission “To maintain a highly motivated, professional and well-trained Unit, with espirit de-corps that is efficient and capable of undertaking all assigned tasks, in order to achieve the end-state of higher command.’’

Taking inspiration from a statement from the Chief of the Army Staff – Major General Thomas Oppong-Peprah; “If you want soldiers to give off their best, seek their welfare”, Lt Col Ampomah has set deficient Unit infrastructure and troops accommodation as a major challenge to be tackled.

A dilapidated structure at the Camp is being renovated at a cost of Eighty Thousand Ghana Cedis (GHS 80,000), to accommodate 25 Young Soldiers, with attempts to complete a 6-unit 2-bedroom accommodation project for Officers, which was started by preceding COs some 8 years ago, as well as the renovation of the CO’s residence.

Lt Col Ampomah has set as his biggest target, the construction of a 500-seater auditorium – for various purposes, including teaching students from the Ghana Armed Forces Command and Staff College (GAFCSC) and the Army Combat Training School (ACTS), on how a battalion is deployed in the field, since the population of students who visit the Unit for such purposes, has grown exponentially.

Lt Col Ampomah schooled at Opoku Ware School between 1993 and 1995 and thereafter attended Wesley College of Education between 1996 and 1999.

In the year 2000, he was enlisted into the Ghana Military Academy and commissioned in 2002 as a 2nd Lieutenant, and was then posted to the 6th Infantry Battalion as a Platoon Commander.

Between 2002 and 2013, he held appointments such as platoon Commander, Unit Intelligence Officer, Adjutant and Officer Commanding all in the 6th Infantry Battalion.

Until his current appointment as the Commanding Officer of 1 Bn, he was the Deputy Command Operations Officer at the Headquarters Central Command, Kumasi from September 2020.