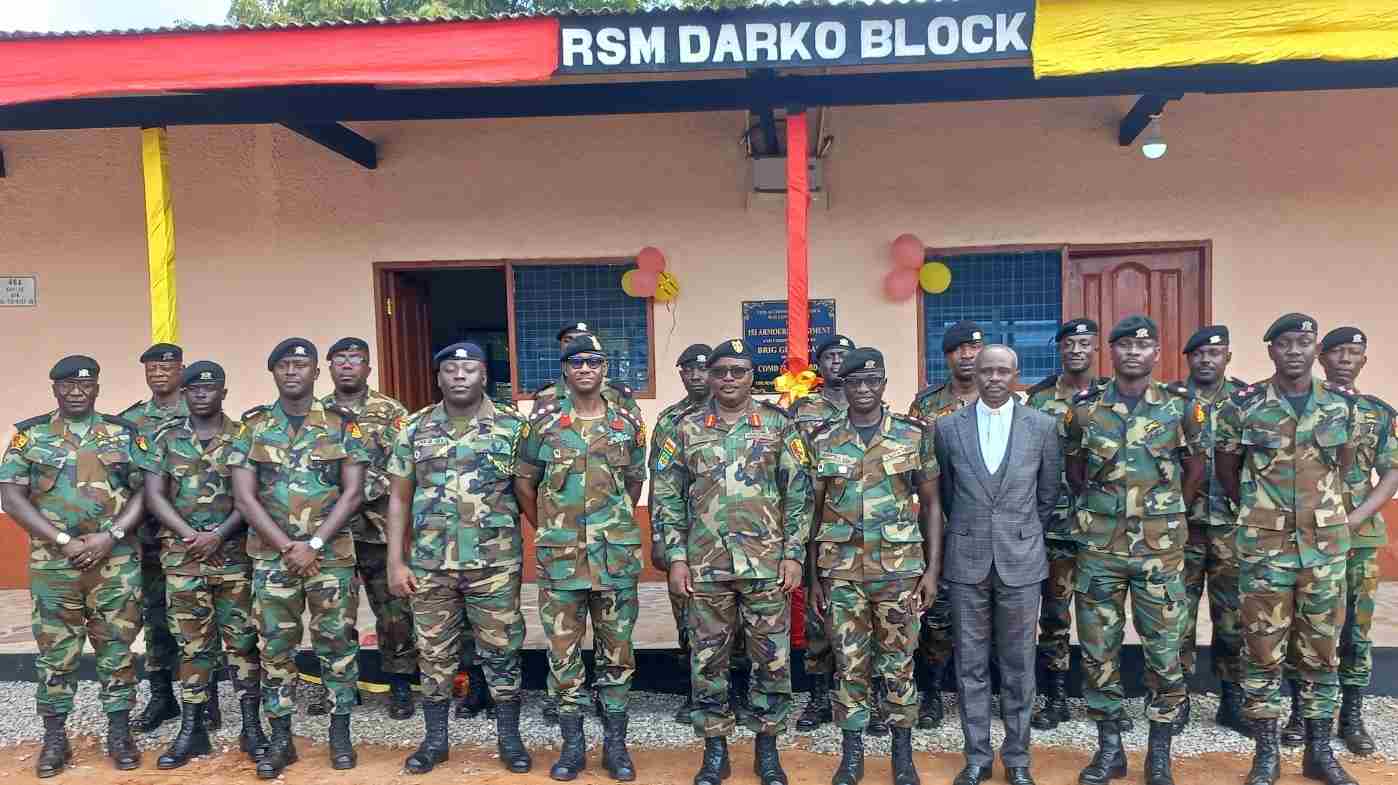 Speaking to the gathering, Brig Gen Gah remarked that the problems in the Ghana Armed Forces (GAF) are such that they cannot all be solved at a go, particularly when resources are not readily available, as regards the general economic conditions, globally, however efforts have to be made in that direction.

Recalling memories of the late RSM, General Gah lauded the CO’s decision to have the structure named after him, as he recalled his encounters with the late Soldier at the Sunyani Liberation Barracks, when he was the Squadron Sergeant Major of then 2 Independent Recce Squadron, and said “If we continue to remember the good ones, when we leave, we would also be remembered”.

Lt Col Ohemeng said the decision to find decent accommodation for the newly passed-out Young Soldiers was taken about 4 months ago, in anticipation of their arrival, even though the numbers expected was 40, but the Regiment was handed 100 Young Soldiers. He was full of relief that his decision had paid off.

The reconstruction project was financed with proceeds from the Unit’s drinking water production and with the financial support of the ‘usual helper’ – the Chief of the Army Staff (COAS) – Major General Thomas Oppong-Peprah.
Lt Col Ohemeng who took over the reins of the Unit on 14 April, 2022, soon afterwards set up a poultry facility of 100 fowls, which have all survived, and would be used to supplement the sustenance of his troops, as he hopes to diversify and expand the enterprise.

The CO was full of praise for his troops who volunteered various artisanal skills such as masonry, carpentry, plumbing to construct the now habitable building.

The Second-In-Command of 153 Armd Regt – Major Baffour Sarpong, in presenting a biography of the Ex-SWO Darko Richard, read the following: He was born on 30 June 1957 to Mr DA Mensah and Madam Yaa Agyeiwaa, at Asafo in the Ashanti Region, had his elementary education at the New Asafo Primary School in Kumasi and completed in 1973.

That same year, he entered the Junior Leaders Company in 1973 and was posted to the then Armoured Reconnaissance Regiment of Ghana after completion of his training in 1976.

After his retirement from the Ghana Armed Forces, he was appointed as PSI at the Ghana Immigration Training School in Assin Fosu where he served until his demise on 30 January 2009.

The late RSM is survived in the Ghana Armed Forces by one of his sons – Captain Anthony Darko, who is with the 15 Armd Bde Headquarters.